My high school t-shirt quilt was the first thing I ever sewed for myself. It was a hot mess, and I learned a ton, but somehow it came together. From there, I made a quilt for my sister, and then sewed my college t-shirts into a quilt. After I felt like I really knew what I was doing, I offered up the service for my school’s Relay 4 Life silent auction. Business grew from there. Social media has helped me reach even more people, and that’s where I met the family for this quilt.

Almost 2 years ago, a mom reached out to my through my Sew Sassy Facebook page. Her daughter’s boyfriend recently passed away and she wanted to use his shirts to make a quilt. The mom had seen pictures of my work, but told me that the daughter had a lot of shirts she wanted incorporated into the blanket. The family was local to Atlanta, so I met up with them to get a better idea of their inspiration. Usually, I use squares out of t-shirts with fabric sashing between. When this family came to meet with me, I knew that my usual pattern wouldn’t work for this. She wanted everything incorporated. When I say everything, I mean everything. She had outfits of his, outfits of hers (that were worn in pictures they took together), concert shirts, music festival wristbands, and shirts from places they visited. Everything.

I was up for the challenge, and this family was beyond wonderful to work with. When the stuff arrived at my house the girl carefully marked things she wanted. I wish I was better about taking “before” pictures, but I think this is all I have. All shirts were marked with painters tape, with logos outlined, or notes stating how she wanted the garment used. 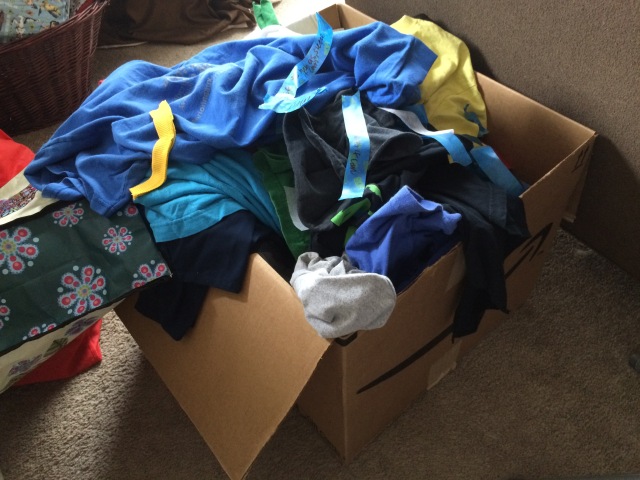 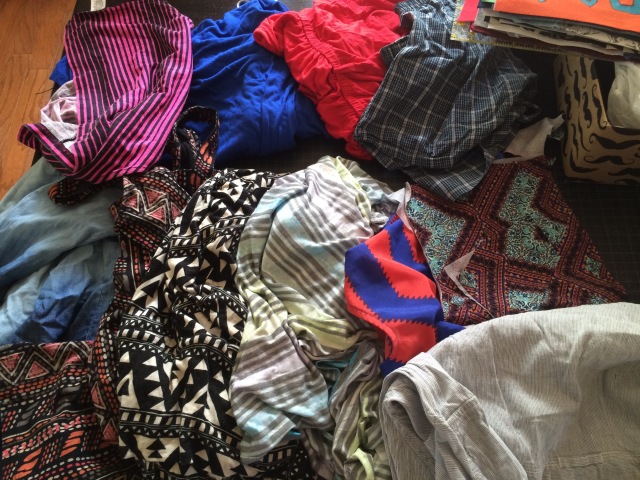 I was still unsure how I was going to make it all come together, but went ahead and ironed the stabilizer on the back of the knit shirts. While I was ironing (and ironing, and ironing), I had the idea to create squares. Usually, I cut my t-shirts for quilts into 15″ squares. Since I had way too many shirts to do that, I would use multiple shirts to make up a 15″ square. Then, sew all my squares together for the finished quilt.

First, I cut the shirts so they were square (or rectangle). I had a whole box of stuff that I called “filler”, and decided to use those to fill in the gaps. Here you can see some of the shirts cut, and how I started to fill in to make squares.

Once I got that laid out I knew that this idea would work. I then started filling in the smaller pieces. Below you can see one of the wrist bands (bottom center square). 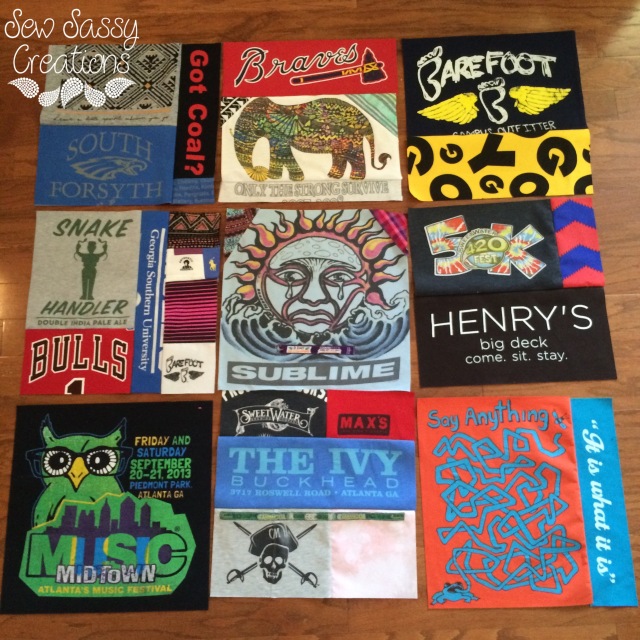 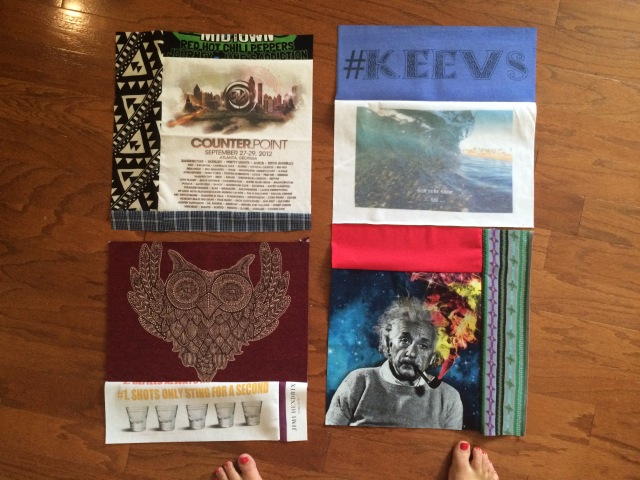 Finally, I was ready to put all 30 squares tougher. In my “filler” bag were pieces that she asked for me to use as much as possible throughout the quilt, so I decided to make bands to run horizontally across the quilt between each of my rows.

I love how the bands turned out and really broke up the monotony of the squares. I was given a flat sheet in my box of shirts, and we decided to use that for the back of the quilt. Over 100 pieces were used to create this quilt. Finished, it fits a full/queen size bed. It’s the largest and most in-deapth project I’ve done thus far, and I LOVE how it all came together. I really hope this quilt is a source of comfort. It was an honor to be trusted with the memories. 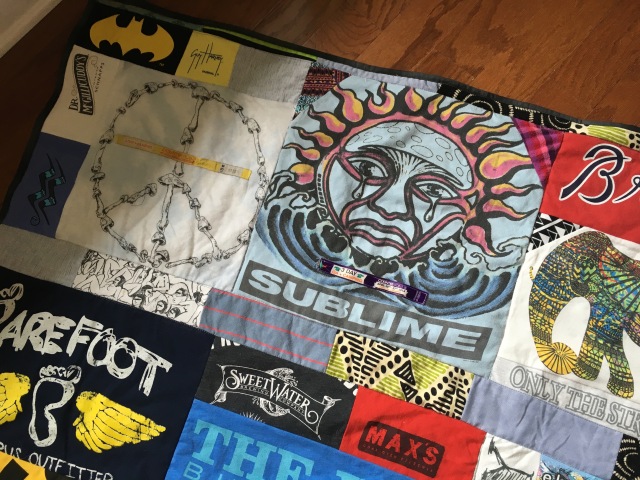 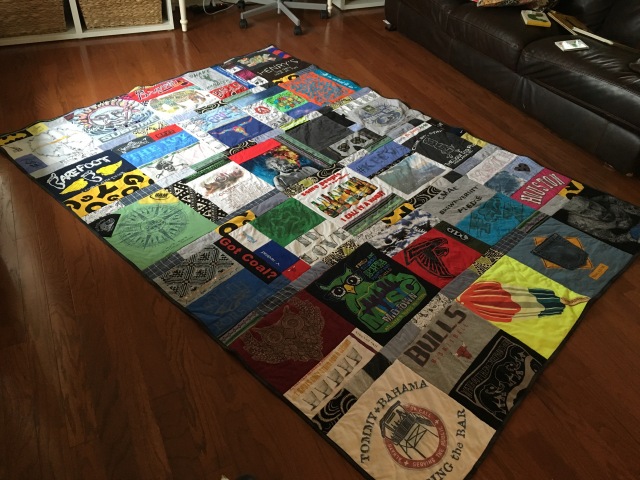 Footnote- I started this project at the end of May 2015. I worked on it throughout the summer, but it was difficult with Zac who was 3 and a half at the time. Once he went back to school in August, I started to kick it into gear. However, it was at that same time decided to list our house. Everything went into storage (our formal dining room was my “office”), but the house sold in a day and I got to get back to work quicker than expected. I’m not sure how it all got done, but it did. Super thankful for our new house and an office with a door to hide my mess.

I’ve said it a million times… I’m an awful blogger. The longer I go without making a post, the tougher it is to sit down and write. Part of what’s added to the craziness is that I went back to work this year. I was a teacher in my former life, and became a stay-at-home mom when Zac was born. Teaching is a passion, but with a pre-schooler who needs me, working a traditional job (teaching public school) was impossible with our schedule. Instead, I’m teaching pre-K at my son’s former church pre-school. I am still able to drive Zac to school every morning, go teach my kiddos, then have an hour (sometimes more) in the afternoons before the bus brings him home. It’s the best of both worlds and I love it.

Working in a pre-school is great in so many ways, but one benefit (for me) is a relaxed dress code. When I taught in the public school system, I dressed up most days. Now, my uniform consists of jeans, a graphic tee, and comfortable shoes. Because I’m me, I’ve enjoyed designing my own t-shirts for work. It’s expanded into selling them to friends and followers.

My newest (and favorite) t-shirt design was actually inspired by my son. Zac was officially diagnosed with autism a year ago. I know every parent reacts differently to receiving an autism diagnosis for their child, but for me it was a relief. Zac was already in an autism preschool program for a year at that point, but once we received the diagnosis we were able to get help for private occupational therapy. A few weeks ago, while I was in the waiting room at his therapy office, one of the speech therapists asked me if I ever made an autism shirt. April is autism awareness month, and she hadn’t found anything she liked. A couple days later one of Zac’s old OTs reached out to me asking the exact same thing, so I decided to draft something up.

I love this shirt. I love bringing awareness to autism. When I had my suspicions about Zac, I actually had somebody (a professional) tell me there was no way he could have autism because he smiled, laughed, and enjoyed being hugged and tickled. If you’ve met one kid with autism, you’ve met one kid with autism. No two kids are the same. When you hear, “it’s a spectrum” people tend to to think of a linear line where autism is categorized mild to severe. It is a spectrum, but there are many spectrums- verbal communication, nonverbal communication, social awareness, sensory integration, cognition, and adaptability. My son didn’t talk until he was 3, but now at age 5 is VERY verbal. The kid never stops talking and asking questions. Zac struggles most with sensory integration. He craves movement and touch, but is super sensitive to certain noises. I am amazed at the progress he’s made through school and private therapy. We’re now at a place where he can say, “mommy, it’s too loud in here.” It’s saved him (and us) from struggling through a meltdown.

Autism has brought some wonderful people into our lives- teachers, therapists, fellow moms… I’m thankful for every one of them, and the impact they’ve had Zac.